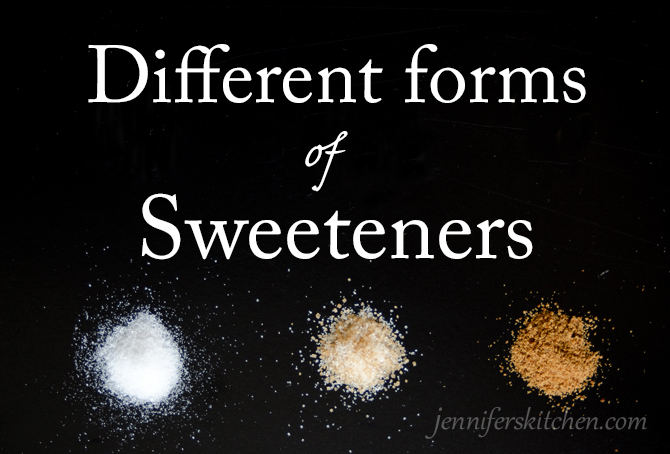 Reading food labels can be confusing as sweeteners go by a lot of different names. Here is a list of some of the most commonly-used sweeteners with descriptions.

• Acesulfame potassium (acesulfame-K) (Also called Sunett) – A a potassium salt containing methylene chloride, a known carcinogen. Long term exposure to methylene chloride can cause headaches, nausea, emotional imbalances, and damage to the liver and kidneys. Acesulfame has been shown to produce breast tumors, lung tumors, and other types of tumors, leukemia, and chronic respiratory disease in rodents.

• Agave – Agave is a sweetener commercially produced from several species of the agave plant. This sweetener has more concentrated fructose than does high fructose corn syrup and has been shown to alter liver function, promote obesity, and increase insulin resistance for both diabetics and non-diabetics.

• Barbados sugar (Also called muscovado sugar) – Barbados sugar is a strong tasting, brown, moist, and somewhat sticky cane sugar. It is made from the first stage of crystallization and is therefore minimally processed and retains some of the vitamins and minerals of the sugar cane. This sweetener is less processed than white sugar.

• Barley malt – Barley malt is a sweetener with a strong, distinctive flavor that is made from sprouted barley. Pure malt extract, which is relatively expensive, is often mixed with corn syrup, a less expensive product.

• Beet sugar – A white sugar derived from beets. This sweetener is highly refined and has no nutrient value. Many feel that beet sugar produces products with an inferior taste and texture compared to those made with cane sugar.

• Coconut sugar – Coconut sugar is produced from the sap of coconut flower buds (not the coconut itself). The sap is boiled to reduce moisture content and then dehydrated.

Many are concerned about the sustainability of producing coconut sugar because coconut trees that are tapped for sap cannot also produce coconuts.

• Corn syrup – Corn syrup is a thick, sweet syrup made by heating corn starch with an acid or by combining it with enzymes to break it down. It is a highly refined sweetener and has almost no nutritional value.

• Date sugar – Date sugar is actually not a refined sugar at all, but simply ground dates. This natural sweetener is high in fiber and nutrients and is a much better option than refined sweeteners. Date sugar can be used in place of sugar in some recipes; however, it will not melt or dissolve in liquids as regular sugar does.

• Demerara sugar – Demerara sugar is a minimally processed cane sugar made by steaming the juice of pressed sugar cane to form a thick syrup. The syrup is then allowed to dehydrate resulting in large, golden to medium brown crystals that are slightly sticky and have a unique flavor and texture. This sweetener is less processed and lower in calories than white sugar.

• Fructose – A form of refined sugar. Table sugar (refined white sugar) is made up of equal amounts of the simple sugars glucose and fructose, which are joined together by chemical bonds.

• Fruitsource – Fruitsource is the brand name of a sweetener made from grape juice concentrated and rice syrup.

• Galactose – A refined sweetener found in a number of commercially prepared products.

• Glucose – A form of refined sugar. Table sugar (refined white sugar) is made up of equal amounts of the simple sugars glucose and fructose, which are joined together by chemical bonds.

• Honey – Honey is a sweetener made by bees from plant nectar. Honey contains trace amounts of vitamins and minerals. The color and flavor of the honey depends on the source of the nectar (clover, buckwheat, orange blossom, etc.). Infants under one year of age should not consume honey.

• Lactose – The sugar found naturally in dairy products. It is usually the main factor responsible for milk intolerance.

• Maltodextrins – A family of highly-refined sweeteners made from rice, corn, or potato starch.

• Mannitol – A sugar alcohol. Known to cause digestive problems in some individuals.

• Maple syrup – Pure maple syrup is a concentrated natural sweetener made by boiling down sap from the sugar maple tree. Do not confuse pure maple syrup with pancake syrup or maple flavored syrup, products that have high fructose corn syrup as the main ingredient.

• Molasses (also called treacle) – Molasses is a thick, dark syrup that is a by-product of the production of beet sugar or cane sugar. Sorghum syrup is sometimes called molasses, but is a different product produced in a different way. See sorghum.

• Panela (also called raspadura or rapadura) – Panela is a minimally processed sugar made by cooking the juice of pressed sugar cane.

• Rapadura – Rapadura is a non-crystallized form of cane sugar made by extracting the juice of the sugar cane and then heating it until it forms a syrup. The syrup is then cooled until the sugar granules are formed. Rapadura has a grainy, rather than crystalline, texture and is very dark as it retains a few of the original nutrients.

Rapadura and sucanat are probably the least processed of all the sugars derived from sugar cane.

• Raw sugar – A cane sugar that is produced by evaporating the juice of pressed sugar cane and then separating the sugar crystals. Raw sugar is an umbrella term which includes any type of cane sugar that is minimally refined and retains some of the molasses coating on the crystals. A list of raw sugars includes (but is not exclusive to) sucanat, rapadura, panela, muscovado,  turbinado, and demarara sugar.

• Sorbitol – An alcohol sugar. Can cause digestion problems for some people.

• Sorghum syrup (also called sorghum molasses) – Sorghum molasses is a syrup made by crushing the stalks of the sorghum plant and then cooking the resulting syrup to concentrate it. Sorghum is a more healthful option than regular or blackstrap molasses.

• Sucanat – Sucanat is a non-crystallized form of cane sugar made by extracting the juice of the sugar cane and then heating it until it forms a syrup. The syrup is then cooled until the sugar granules are formed. Sucanat has a grainy, rather than crystalline, texture and is very dark as it retains a few of the original nutrients.

Sucanat and rapadura are probably the least processed of all the sugars derived from sugar cane. The name “sucanat” is a contraction of the words, “sugar cane natural”.

• Turbinado sugar (also called turbinated sugar, raw sugar) – Turbinado sugar is a cane sugar with large, light brown crystals that is produced by crushing sugar cane and collecting the juice, which is then evaporated and spun in a centrifuge (or turbine). This sweetener is less processed than white sugar. The names turbinado sugar and demerara sugar are often used interchangeably.

• Xylitol – Xylitol is a sugar alcohol. Known to cause digestive problems in some individuals.

Americans eat far too much sugar, a contributor to obesity, diabetes, and many other health issues. But life can be just as sweet without sugar. I have many yummy recipes with no added sugar. Click here for all of my sugar-free recipes.